The Passover Seder for ULC Minsters 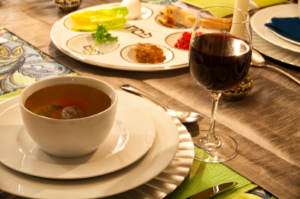 Passover is one of the most important holidays of the Jewish faith. It celebrates the liberation of the Israelites from slavery in ancient Egypt. The Passover Seder ritualistically commemorates this event, with the participants re-enacting the enslavement and the subsequent liberation of the Jews. Today, the Passover Seder can also be used to focus on themes of slavery and liberation in modern culture. ULC ministers who get ordained may want to adapt the Passover Seder as a means of celebrating human freedom, while remembering that slavery still exists in many forms around the world. Here are some of the ritual dishes eaten at the Seder.

Perhaps the most well-known Passover dish is simply matzoh, or unleavened bread. It is a symbol of the celebration of Passover; according to the Torah, the Israelites left Egypt in such a hurry that they could not wait for their bread to rise. Karpas are greens dipped in salt water is eaten to symbolize the tears of the slaves in Egypt. Parsley is often used.

Charoset is a mixture of apples, wine, walnuts, and spices, and represents the mortar the Israelites used to make bricks for the Egyptians. Horseradish, called maror and bitter herbs are eaten together with matzo and charoset in a sort of sandwich as a substitute for the Passover offerings once brought to the Holy Temple in Jerusalem. It is also used to commemorate the bitter taste of slavery.

A beitzah is a hardboiled egg that is used to represent the sacrifices made in the Holy Temple during festivals. Finally, a zeroa, which is typically a roasted lamb bone, acts as an additional representation of the Passover sacrifices of the past. In some contemporary settings, the roasted lamb bone is substituted for a vegetarian or vegan option such as a roasted beet.

Four cups of wine are also drunk during the Seder in order to commemorate the promise that God made to the Israelites in the Bible, specifically in Exodus 6:6-7. In those verses, God says that he will bring out the Israelites from slavery, that he will deliver them from bondage, that he will redeem them, and that he will take them as his own people. In addition, the wine is dropped onto the plate during the recitation of the Ten Plagues visited on the Egyptians as a means of mourning the sufferings of God’s creations. Substitutes such as grape juice can be used for those who do not drink alcohol.

In addition to the ritual dishes, other dishes such as chicken matzoh ball soup are eaten during the meal, as well as salads and various desserts that are suitable for Passover. This means that they have not been leavened.

After one gets ordained, a minister may be interested in holding their own Seder. The Passover Seder can be a wonderful way for ULC ministers to bring together people of all faiths in order to focus on themes of freedom and liberation.