Some Churches Open Up to Gay Members 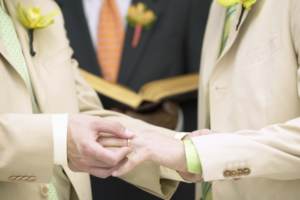 Thousands of parishioners at City Church in San Francisco can now open their hearts to their lesbian, gay, bisexual, transgender and queer (LGBTQ) community members with full fellowship in the evangelical church. While it has always been open to the LGBTQ community, the church’s official policy in the past required celibacy of gay members to be accepted as members. The policy has changed officially, but not without controversy.

The one and three quarter million members of the Presbyterian Church (PC) in the U.S. also take a step toward equality this year. The church is set to recognize a more inclusive definition of marriage beginning in June. Called Amendment 14-F, the new policy to be included in the church’s official Book of Order will describe the marriage relationship as one between two people, rather than the gender differentiation that used to accompany the definition.

A Trend of Inclusion

Some of the churches that have formally adopted policies of acceptance toward LGBTQ individuals without a requirement of celibacy in their lives now include at least three prominent examples:

Insiders at some of the institutions of worship note that the changes come at a cost. At least two board members at City Church have resigned as a result of the change. GracePointe in Nashville reports decreased membership levels, attendance numbers, and giving totals since they have opened to LGBTQ members.

With the changes to the PC, pastors may now perform marriages for same-sex couples in the faith. The church’s decision to join the handful of religions that now recognize such marriages and allow their leaders to officiate at them is a welcome step for many members. Leaders of the LGBTQ advocacy group More Light Presbyterians noted that, “many families headed by LGBTQ have been for waiting decades to enter this space created for their families within the church community.”

With the announcement of the policy, the church affirms that ministers who choose not to officiate at same-sex weddings are free to make that choice. Clergy members who object to the wording of the new statement are permitted to abstain from involvement in gay marriage if they so choose.

As more people across society come to see their LGBTQ neighbors, friends and family members as part of the community, more rights continue to open up to them. While small steps such as the opening of the definition of marriage to accept same-sex partners are significant, they are also still controversial. As change progresses, more and more individuals throughout the country see that sharing fellowship with gays and allowing all people to be open and honest with themselves and others builds a stronger community.

Policies of inclusion set tremendous examples for skeptics who resist further association with people and lifestyles that they do not understand. As humans grow in understanding, tolerance follows. People who come to realize that all creatures on this Earth are related soon come to see that true religion comes from a place of connection, and they are encouraged to build on those ties.