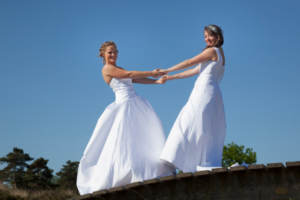 There are many similarities between a same-sex wedding and a heterosexual wedding, but as you might have expected, there are some differences.

If you’ve never been to a same-sex wedding before, you may not know what to expect. It can be a bit different from a straight wedding. There are many similarities between a same-sex wedding and a heterosexual wedding, but as you might have expected, there are some differences. While most of these variances are not significant, it can be helpful to know what to expect when you have only attended traditional weddings in the past. One thing you may notice is that the more same-sex weddings you attend, the more you see how different they can be from each other.

Who Walks Down the Aisle?

As you probably know, in a traditional wedding, the bride walks down the aisle (typically with her father or another close male relative), while the groom waits at the front of the wedding venue. What happens when the couple is made up of two males or two females? Really, it depends on the couple. Some prefer to keep somewhat traditional bride and groom roles, with one walking down the aisle and the other waiting at the front. When this happens, the person may walk down the aisle alone, with a friend, or with a parent. However, there are many other different ways this can be handled.

These are just a few of the ways this might be handled. Perhaps you will see something you never thought of. One of the great things about same-sex weddings is that the couple often feels more freedom to be different, meaning it will often be a one-of-a-kind wedding.

When the ceremony involves two women, sometimes both of them wear a dress. Alternatively, they may both choose to wear a nice shirt and pants. With men, both will typically wear pretty similar attire. However, there are always exceptions to the rule, so you may see someone dressed differently than you expect.

Where Do People Sit?

In traditional weddings, there is generally a side for brides and a side for grooms. However, things might be a little different in a same-sex wedding. It can be pretty easy to walk up to the usher and say whether or not you are sitting on the bride’s or groom’s side. It may seem a little awkward to say the person’s name, but you shouldn’t worry. If you want to sit on a certain side, then simply tell the usher the person you are there for. If you are mutual friends with both of them, then let the usher know you can sit on either side. It may be open seating, meaning that everyone finds a seat wherever they want, without worrying about sitting on a certain side.

The wedding party is often different in a same-sex wedding as well. While there are often still flower girls, ring bearers, and candle lighters, the bridesmaids and groomsmen situation may be a little different. A wedding may have all bridesmaids or all groomsmen, or it may still have a few of each. This is especially true in weddings where the couple tries to maintain traditional bride and groom roles. Even though both are the same sex, they may find a few close friends or family members of the opposite sex to be in the wedding.

Same-sex weddings can be very different from traditional weddings. They can be especially fun to attend because you never know what to expect.