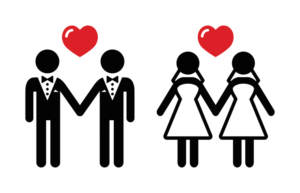 Same-sex marriage has really come to the forefront of many news stories in the past year, especially since the legalization of same-sex marriage nationwide by the Supreme Court last June. Many of the stories have centered around religious battles, discrimination lawsuits, and other tales of people who have had a hard time adjusting. As time goes on, we will likely see more and more people become accepting of same-sex marriage and LGBT rights in general. After all, it’s the norm now, and it’s something they are going to have to get used to. Whether you have always been a strong supporter of same-sex marriage or you are someone who has had to adjust to the idea of people of the same sex getting married, there are some interesting facts that you may not know. Here are some of them.

It may or may not seem like a somewhat new concept, but same-sex marriage was banned worldwide through the year 2000. It wasn’t until 2001 when the first country legalized it. The Netherlands was the first country to allow it nationwide. Over the next fifteen years, it was legalized in fourteen different countries. These countries include:

When going up for his first presidential nomination in 2008, President Barack Obama said he was against the legalization of same-sex marriage. While he is in support of it now, that was not the first time he had flip-flopped on the issue. He first addressed it in an interview in February of 1996, when he said he was a supporter of gays being able to marry. A few years later, in October of 2004, he said a marriage should stay between a man and a woman. He cited his personal religious beliefs as reason for having this feeling. He reiterated this feeling in 2008. In 2010, he admitted that he struggled with the decision, as he doesn’t want to discriminate against anyone in the country but wanted to do what was right. In 2011, he said he was “working on” becoming supportive of same-sex marriage. However, the fact that the White House lit up in rainbow colors in celebration of the Supreme Court decision would suggest he has come to support it completely.

In the 1990s, most Americans did not believe that same-sex couples should be allowed to get married. However, in 2014, a poll showed that 55 percent of Americans were now in favor of same-sex marriage, and that number has likely grown since it became legal nationwide.

Unfortunately, there are still areas in the world where being gay can get you killed. It is illegal to be gay in countries such as Saudi Arabia, Sudan, and Iran, and you can be sentenced to the death penalty if you are caught or suspected of being gay.

Even though same-sex marriage wasn’t legal anywhere in the 1990s, that doesn’t mean it wasn’t featured in television shows. Who can forget Ross’ ex-wife in “Friends” getting married to a lesbian in 1996? Over time, there have been more and more gay people in television shows. It isn’t uncommon at all to turn on a sitcom and find at least one character in the show who is gay. There are several shows where one of the main characters is gay. This includes shows such as “Will and Grace,” “The L Word,” and “Rookie Blue.”

As time goes on, same-sex marriage is going to start to become a very normal part of society. It’s amazing to see how far we’ve come in the last couple of decades, considering that even 15 years ago, it wasn’t legal anywhere.