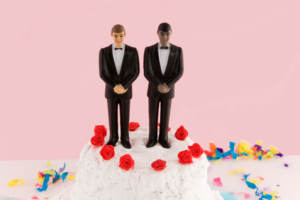 If you’ve been invited to a gay wedding, you may not know what to expect. Many have never attended a gay wedding before, and so you may be wondering how different things are going to be. Now that same-sex marriage is legal in all 50 states, gay weddings are only going to be more common. If you’ve been invited to a same-sex wedding and don’t know what to do, don’t worry. Etiquette at a same-sex wedding is pretty similar to etiquette at any wedding. Still, there are a few things you may want to keep in mind.

Only Go If You’re Invited

This might sound pretty obvious, but there are some people who seem to have a hard time understanding this concept. You should only go to a wedding if you have received an invitation. The only exception to this is if your significant other or friend was invited and the invitation states that he or she may bring a “plus one.” Wedding crashing is something that might seem cool, but really it’s rude and not socially acceptable. It seems that more people try to crash same-sex weddings than traditional weddings. This is probably because they are curious to see what a same-sex wedding looks like. Still, you should only go to a wedding you have personally been invited to.

Keep Your Opinions to Yourself

Maybe you are still on the fence about the whole same-sex marriage concept. Perhaps it isn’t something you agree with at all. In this case, it doesn’t matter. You should keep your opinion to yourself. You aren’t going to change their minds, and you will run a pretty high risk of ruining your relationship with the couple. If it bothers you that much, then you probably shouldn’t go. If you decide to attend, don’t say anything about disapproving. Just smile and be happy for the couple.

It can be confusing when there are two wives or two husbands. Some same-sex couples prefer to avoid the use of these terms altogether. Find out what it is they are calling each other, and use that. There are some different terms they may choose:

If they don’t want to use any labels at all, then you can simply refer to them by their names.

This is actually something that you might want to consider for any wedding, whether it’s a same-sex wedding or not. It seems that once a couple gets married, when they are going to have children is everyone’s business. Some couples don’t want kids, some want to wait a few years, and some will begin trying right away. Really though, it’s nobody’s business. If they decide to share the news with you, then great. But you shouldn’t be asking them such personal questions.

This issue can be even more sensitive for same-sex couples. Obviously, they are going to have to look for alternative ways to have a child. While there are several different ways this can be done, they may not have even begun thinking about that yet. Don’t put pressure on them or make a situation uncomfortable by asking about their reproductive schedules.

Be Ready for Some Differences

Some same-sex couples prefer to keep their weddings as traditional as possible. Others would rather go a different route. Be prepared for anything. You might see some ideas that you would have never thought of, so going to a same-sex wedding can actually be quite interesting.

As you can see, most etiquette when it comes to same-sex weddings is simply common sense. Being sensitive to the two people getting married is the most important thing. You can do this by not asking a lot of personal questions and keeping any reservations to yourself. Showing your support is all you need to do, and be ready to enjoy what could be a very unique wedding.