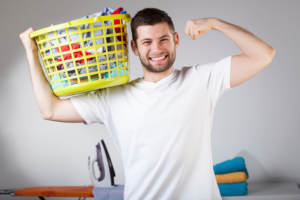 The question of which partner will do what chores in the household has been a subject of dispute in many marriages for generations. It may be less of a factor in same-sex marriages, some studies find. The key to building a good foundation for a lifetime of harmonious household relations, with the dishes being done and the garbage taken out appropriately, appears to come down to one simple and predictable factor: communication.

For one young man, communication and expectations shaped what he thought he could achieve in life as a gay deaf man in a mostly straight, hearing world. His same-sex attraction identity had always been clear to him, and never a source of much controversy in his life. His hearing impairment had also been a part of his life throughout, and was simply part of his identity. He found, though, that both elements of himself put him outside the norm in ways that were sometimes uncomfortable, at first.

Who Does the Dirty Work?

A recent study from The Families and Work Institute found that both gay and straight couples have conflicts over household chores, and who is to do them. Not surprisingly, in male-female relationships, studies find that women consistently do more of the cooking, cleaning, and childcare, while men typically do more repair and outdoor type work.

In same-sex relationships, there appear to be less disputes generally about who is to do the tasks, and it may come down to early communication as the key factor. The study surveyed some 225 gay and straight couples, where both partners earned income, to learn more about the ways that the partners divide up tasks in the home.

Couples that reported having a talk about dividing household responsibilities and chores prior to moving in together had improved satisfaction with the way that the tasks were divvied up in their family. A related finding noted that women are more likely to remain quiet about how work should be shared prior to the start of the relationship. Some notable findings included the facts that:

As the author of the study noted, “biting your tongue hurts longer than you think.” While some may find it difficult or uncomfortable to spend part of the happy days of an early relationship with plebeian discussion of matters like who is to wash windows, clean toilets and floors and change diapers, those who have the conversation early and clearly are much more likely to be satisfied with the division of work in the relationship.

Learning to Believe in Possibilities

Although his aunt, who is also deaf, cautioned him in his late teen years that “the chances of finding and marrying a hearing partner are incredibly slim,” a gay deaf young man found that the primary limitations in his life were the ones he placed on himself. Noting that technology has changed, allowing him to participate more fully in life without limitation based on his hearing impairment, he found that he has been able to find acceptance in groups that are different from him on the basis of physical characteristics or gender preference.

In many areas of life, from dividing household chores to facing apparent obstacles for a “normal” life, many people find that communication is key to understanding the situation and achieving a greater degree of happiness. Sometimes it is tough to talk about awkward or uncomfortable topics, or it may seem that the subject will just naturally work out a resolution. Usually taking the step to talk it over before it becomes a problem avoids challenges down the road.