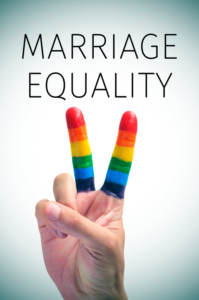 A significant victory for marriage equality in the United States was achieved in 2015 with the landmark Obergefell v. Hodges Supreme Court decision. Nevertheless, the struggle continues around the world for same-sex couples to win and retain this right. Recent gains in countries such as Mexico are still challenged by their adversaries, while marriage reform remains a question in places like Taiwan. In some cases, LGBTQ people grapple with the their behaviors being criminalized and identities outlawed. Even in the United States, the marriage equality battle continues and current political conditions introduce new potential threats.

Mexico City set a precedent for Latin America in 2009, with the city’s assembly passing a sweeping bill that introduced marriage equality and permitted same-sex couples to adopt children. However, a December 2016 article in The Guardian online reported that same-gender married pairs across the country face an uneven recognition of their rights. For one thing, legal status had only been explicitly granted in 10 out of Mexico’s 31 states. Moreover, many local officials only enforce protections when pressed or challenged. Thankfully, Mexico’s high court ruled in 2015 that any law obstructing citizens’ rights to same-sex marriage was discriminatory, effectively working around prohibitive state and local laws.

Today, staunch opposition to marriage equality remains from politicians of varying ideologies, several lobby groups and the Roman Catholic Church. Meanwhile, public opinion is deeply divided, as indicated by a recent poll in the El Universal newspaper revealing that 43 percent support same-sex marriage while 49 percent remain opposed. Because of these factors, same-gender pairs continue to fight for not only recognition of their marriages, but also access to the same benefits as heterosexual married couples.

Deep divisions exist in Taiwan over marriage equality, but there are indications that victory could be in sight. In November 2016, the New York Times revealed that several bills currently being debated in the country’s legislative system seek to grant the right for same-gender couples to marry. While the future is uncertain, some speculate that any one of these could be passed as early as 2017. Additionally, its current president Tsai Ing-wen has indicated her support for LGBTQ civil rights. However, additional factors further complicate the situation. Public opinion is evenly split, with those both for and against making strong cases for their sides. In addition, LGBTQ activists are even divided over some concerns. A few of the bills have been criticized for lack of public participation in their drafting, while bisexual and transgender people worry that they will be left out of any legal protections.

Other Nations Face Their Own Struggles

While some countries are embracing marriage equality and other civil rights, others face difficulties thanks in part to religious intricacies and cultural legacies left over from European colonization. For example, the current penalization of same-sex sexual activity in India was first established by penal codes enacted under British rule. Ugandan LGBTQ individuals face harsh legal sanctions due to outside influence of their government by United States Christian fundamentalists. Meanwhile in the States, several Republican electoral victories and pending legislation are causes for concern, including bills such as the First Amendment Defense Act that would permit anti-LGBTQ discrimination based on “religious convictions.”

Globally, the Future Is Uncertain

With a mix of conditions in various parts of the world, LGBTQ activism continues to be locally focused. While campaigning for acceptance and ideological change worldwide, the marriage question is most salient in nations where same-sex identity and activity are not illegal. Proponents of marriage equality have made some progress but still face opposition generated from religious, cultural and historical factors. LGBTQ civilians and activists alike remain aware of the need for continued fighting to ensure that new victories are not lost and that civil rights become a reality for all.