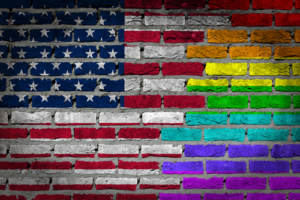 A January 2019 New York Times piece documented the increasing visibility of conservative-leaning LGBTQ people. Writer Benoit Denizet-Lewis described some of their public discourse, including disdain for what they view as leftist emphasis on identity politics. Journalist Gabriel Arana discusses similar trends in a November 2017 piece for the online LGBTQ publication them. He mentions that some of the LGBTQ community didn’t benefit from marriage equality, since they face larger struggles such as income inequality and racial prejudice.

Arana points out that much of the LGBTQ civil rights movement embraces intersectionality, a concept defining how people experience multiple avenues of marginalization. For instance, black transgender women suffer the highest rates of violence, murder, poverty, and discrimination in housing, employment, and healthcare. These problems often result from the convergence of racism, sexism, and transphobia.

At the same time, Arana also mentions how some LGBTQ people view intersectionality in a negative light. Some white cisgender gay men see themselves as being vilified, especially in conversations about privilege. Moreover, dating preferences such as “no fats, no femmes, no blacks” are criticized for being based on racism, ableism, lookism, and misogyny.

Discussions About Visibility and Inequality

In 2017, the Pew Research Center reported that more people of color now identify as LGBTQ. This development and other issues have spurred discussions about the centering of whiteness within the community. As more media and art portray queer and transgender characters, LGBTQ people of color still find themselves underrepresented. In an NBC News piece, journalist and essayist Michael Arceneaux discusses this lack of visibility amid the success of the 2018 films “Love, Simon” and “Call Me By Your Name.”

At the same time, others are making connections between bias and the concept of whiteness. Teaching Tolerance spells out how this concept works, citing author Jacqueline Battalora’s explanation that whiteness didn’t exist until discriminatory laws based on race were passed throughout the world. The editors mention how it’s seen as a normal social default, allowing some the privilege of not worrying as much about personal safety, being valued based on skills and merit, and obtaining basic needs.

Others expand the discussion, proposing that anti-queer and anti-trans ideologies didn’t develop separately from racism. Son of Baldwin points to anti-LGBTQ laws throughout Africa and Asia as evidence of this. As leftovers from European colonial occupation, he suggests that these demonstrate how such sentiments were used to control and stratify occupied populations.

Police Issues and the LGBTQ Community

Police brutality is a recurring theme in discussions about race and the LGBTQ community. Vox writer German Lopez mentions how police harassment and brutality were key factors prompting the 1969 Stonewall Riots. A May 2018 NBC News article disclosed several notable findings from a 2017 study by medical and public health professionals Anthony L. Bui, Matthew M. Coates, and Ellicott C. Matthay. Police-related deaths of blacks and Hispanics occur at younger ages and higher rates than their white counterparts. Conditions like these prompt dialogue and protests from LGBTQ people of color, such as the four black activists who were arrested at Columbus Pride in 2017.

Anti-LGBTQ discrimination has been a central focus on activism throughout the last several decades. Marriage equality was a major victory, but more concerns linger in the post-Obergefell world. Issues related to racism, poverty, and inclusion are now key. With contention about goals and needed progress, debates and disagreements continue within the public discourse.