Love One Another: How To Find LGBTQ-Affirming Faith Communities 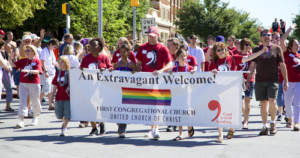 Hillsong is well-known as a popular and charismatic Christian megachurch. Founded in Australia in 1983, Hillsong has attracted celebrities such as musician Justin Bieber and actor Chris Pratt. Yet it’s not without its controversy and disturbing details. A January 2019 Queerty article delved into the organization’s past, revealing its history of homophobia. This seems at odds with its hip, youth-oriented image. Even so, it’s one example of why LGBTQ Christians remain cautious when seeking out faith-based organizations. Thankfully, congregations exist where queer and trans people can find affirmation and community.

In a September 2018 piece published in The Outline, journalist Lea Ceasrine explained why she left Hillsong Church. She recounted several troubling details that prompted her choice. Founder Brian Houston released a statement in 2014 in which he claimed that the church does not “affirm a gay lifestyle.” This statement came on the heels of the discovery that openly gay people served on its choir staff.

In light of events like these, how can LGBTQ individuals find affirming religious communities? Several resources can help guide queer and transgender Christians to welcoming organizations. One popular website is GayChurch.org, which maintains a directory of accepting houses of worship. Pew Research Center also provides a general overview of where various sects stand on marriage equality. While it’s not a perfect litmus test, it can provide some guidance. Several LGBTQ-friendly denominations exist in the United States:

GayChurch.org also keeps a list of affirming denominations from around the world. Church Clarity’s scorecard rates churches on how they communicate their policies toward queer and transgender people.

Tips for Finding the Right House of Worship

Queer Theology also mentions that each denomination has its own unique language. Look for key phrases that point to an affirming congregation. For instance, the Evangelical Lutheran Church in America uses the words “Reconciling in Christ.”

Fulfilling the Need for Communion and Belonging

Hillsong has seen controversy for many reasons. It’s gained criticism for appearing warm, fuzzy, and hip while sending mixed or hostile messages about LGBTQ people. Similarly, some churches can seem ambiguous or outright unaccepting. Fortunately, directories can help in the search for accepting congregations, while other resources offered by LGBTQ Christians provide essential guidance in evaluating a house of worship. With these tools, queer and transgender people are able to find affirming communities of faith.