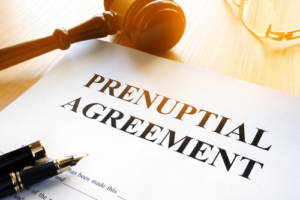 Say the words “prenuptial agreement” and many people will picture high-profile celebrity divorces or lopsided contracts that are ridiculously unfair to one spouse. They’ve often been the stuff of gossip columns and daytime soap operas, but the Huffington Post points out that more young adult couples are asking attorneys to draw up these contracts. After the landmark Obergefell v. Hodges Supreme Court decision, LGBTQ pairs have also been advised to adopt premarital contracts. By learning about their basics, you and your spouse can be better informed.

Many misconceptions surround prenuptial agreements. Business Insider’s Kristine Solomon lists several of these typical fallacies. While these contracts have been associated with wealthy individuals, they’re intended to help any couple avoid disputes about marital assets. That can include anything from a primary residence and retirement accounts to household artworks and pets. One-sided agreements or those with unreasonable provisions usually won’t be enforced: for instance, clauses that prohibit spouses from seeking child support. Contracts may also be nullified if the individuals signed them under duress or didn’t understand their terms.

What Do These Contracts Actually Do?

Nolo’s legal encyclopedia describes the basic elements of most premarital agreements. They should accurately disclose each future spouse’s assets and liabilities, as well as specific property rights in the event that the marriage ends. In addition, prenups can be used to pass property to children from previous unions, protect each spouse from the other’s debts, and even form the basis for later estate planning.

Typically, most assets acquired during a marriage are considered marital property. Without a prenup, your state’s laws on marital property, probate, and divorce will govern how these assets are divided. At the same time, these laws also determine the validity, enforcement, and execution of your prenup. Forbes contributor Christine Fletcher explains that the legal jurisdiction over your prenup will depend on where the marriage ceremony occurred, the state in which you reside, or the applicable state laws specified by the agreement.

Do We Need a Prenuptial Agreement?

Besides securing assets meant for your children or shielding your spouse from liability for your debts, prenups also offer other types of protection. Wedding Wire’s Stephanie Hallett advises that having one may be beneficial in certain cases:

Writing for Forbes, financial experts John Schneider and David Auten add that these types of contracts can also be written after a couple’s already gotten hitched. Many couples who rushed to wed after the historic Supreme Court ruling didn’t have prenups beforehand. Schneider and Auten suggest that marital agreements may help clear up discrepancies and avoid protracted legal battles later on.

When drawing up a prenup or marital contract, both spouses should have independent legal counsel. While this is already recommended to ensure equitable terms, many states will not consider an agreement valid unless both parties have secured legal representation. Also, you’ll need accurate documentation and complete disclosure about your financial affairs. Honesty is paramount at this stage, so both partners should enter the process prepared to truthfully reveal their financial affairs. Without these vital steps, a judge may rule that your agreement is not enforceable.

Choosing What’s Best for Your Marriage

Whether to clarify asset division, protect certain types of property, or negotiate more favorable terms, prenups can be useful tools in many situations. Both partners should secure legal counsel and be forthcoming about their assets, liabilities, and financial goals. Keep in mind that every couple’s situation is different. To get definitive guidance on whether you need a premarital contact, it’s best to consult an attorney.