Blending Families: Moving In Together With Your Pets 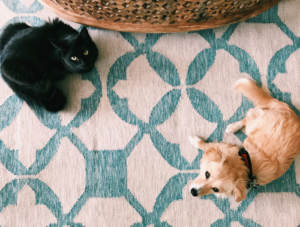 Moving in together is a significant step in your relationship. You must adjust to each other’s schedules, rhythms, and preferences. Your animal companions have similar needs. Pets feel fear and anxiety just as we do, but they also communicate and perceive the world differently than us. Creating a blended home with both humans and animals takes work, but it can be accomplished by following some wise advice.

There isn’t a lot of hard data on LGBTQ pet ownership. However, available statistics indicate that queer and transgender individuals are more likely to have pets than their straight and cisgender counterparts. In a 2018 AutoStraddle survey, 68.6% of respondents had at least one pet. An older poll by Harris Interactive revealed that around 70% of LGBTQ people had pets. With these numbers, it’s no surprise that creating a shared household means acclimating both animals and people.

Talk About Goals and Expectations

Before moving day, you’re going to discuss important subjects like chores, finances, and boundaries. While you’re at it, don’t forget to talk about your pets. The Chicago Tribune’s Alison Bowman stresses the need to discuss pet care responsibilities. Neither partner should assume that the other will assist with care. Physical boundaries for the animals should also be discussed. If one partner insists on allowing the cat into the bedroom but the other is against the idea, that could pose a problem.

Creating a multi-pet household isn’t easy. You can’t just throw them together and hope for the best, as Apartment Guide writer Lindsay Smith points out. This is especially true with dogs and cats because they socialize differently than we do. Both use sound, body language, and scent to communicate. They can also be territorial and take longer to adjust to new housemates.

Stay Current on Exams and Vaccinations

Before your animals are together in the same space, you should ensure that they’re in the best of health. Schedule a vet visit and confirm that your pets have all their vaccinations. You should also get documentation for any medical issues as well as required medications.

Get Your Pets Acquainted

The Humane Society recommends a gradual introduction process for dogs. Their first meeting should be on neutral territory, such as at a public park. Walk the dogs separately at first but at a distance where they can see each other. Praise or reward them with treats when they play together nicely, but let them acclimate at their own pace. Keep an eye on their body language and slow down if either dog seems nervous or stressed. The Humane Society also recommends monitoring the dogs closely once you’re sharing a home. Separate them with a baby gate until they’re more comfortable with each other.

Meanwhile, cat behaviorist Jackson Galaxy describes cat introduction strategies. Both cats should have “base camps,” or spaces in your home that are exclusively theirs. Scheduled meals establish a routine and set the stage for future shared mealtimes. Don’t allow the cats to see each other until they’re comfortable in their base camps. Once this happens, expose each cat to the other’s scent by allowing them to explore each other’s base camps. The rest of the process slowly brings them together, letting them see each other while separated and then gradually occupying shared spaces.

Living together brings many challenges for both humans and their pets. Everyone needs time and room to adjust to change, especially animals. As their human guardians, you and your partner can help this process. Clear rules and responsibilities are important, but so is a gradual introduction process. With time, practice, and patience, you’ll help create a happy home for everyone involved.